Pacific Gas and Electric Co. (PG&E) has agreed to a $125 million settlement with the California Public Utilities Commission (CPUC) over the utility’s role in igniting the 2019 Kincade wildfire. 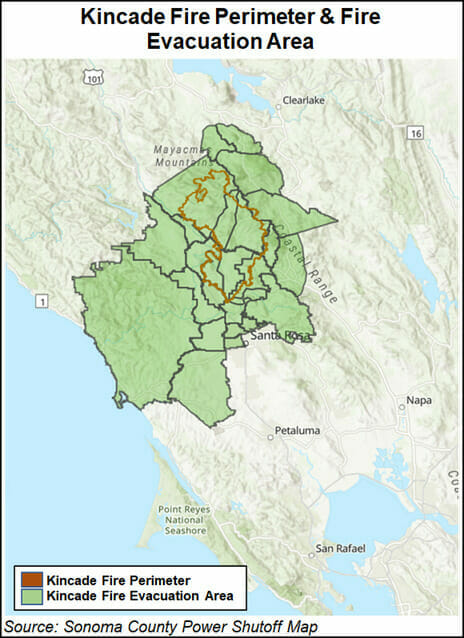 Under a settlement with the CPUC’s Safety and Enforcement Division (SED), PG&E agreed to pay a $40 million penalty to California’s General Fund and forgo $85 million in cost recovery for removing abandoned transmission facilities within its service territory.

Last year, an investigation by the California Department of Forestry and Fire Protection (CalFIRE) determined that a PG&E transmission line in the Northern California wine country caused the Kincade Fire. The fire burned more than 75,000 acres of land, destroyed 374 structures, damaged 60 buildings, and injured four firefighters before it was fully contained two weeks after it began.

According to the settlement, “For purposes of resolving this investigation, PG&E does not contest CalFIRE’s determination that the Kincade Fire was caused by PG&E’s electrical transmission lines.”

SED’s investigation into the Kincade wildfire and the involvement of PG&E’s infrastructure found multiple violations of General Order 95, “a CPUC regulation that sets safety factors and strength requirements in the design, construction, and maintenance of overhead electrical lines and communications facilities.”

PG&E said it would also remove the conductor and structures associated with about 70 permanently abandoned transmission lines or portions of lines in its service territory over a ten-year period.PG&E’s equipment has been found to be the cause of numerous major wildfires that have plagued California for the past five years. The company has estimated losses of more than $1 billion collectively for the 2020 Zogg Fire and the Kincade Fire, and emerged from bankruptcy after a $58 billion reorganization plan last year.

Join the 500+ Dixie Fire victims we represent. Schedule a FREE consultation to discuss your legal rights and potential claims against PG&E. Call (530) 631-3379